I’ve been an urban cyclist since living in Frankfurt, Germany and while I’m certainly not a hardcore bike commuter, I do enjoy viewing new cities from the seatpost.  A recent trip to Copenhagen had me excited to be immersed into what some say is Europe’s most bike-centric city.  Over three days, I cycled through the historic Latin Quarter, the bustling downtown business districts, the bucolic field-flanked trails in Christiania. I checked out the first tier of suburbia as well, and was pleasantly surprised to see that bikes ruled even over longer distanced commutes where cars typically reign.

I snapped a lot of shots, but many were lost in a tragic memory card accident, so I’ve pieced together some contextual shots from the remaining few. As they say, it’s just a reason to pay another visit, right? 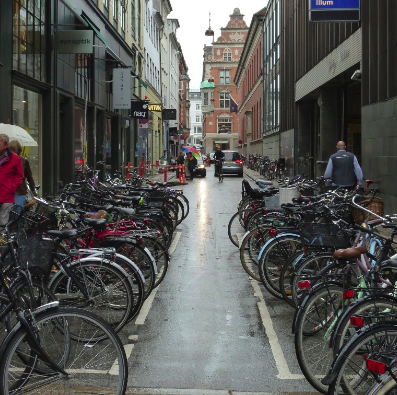 A few things worth noting:

a) Everyone cycles. Men in suits, women in heels, grandmothers loaded with a basket of groceries. I saw a JUDGE riding mid-day, clad in official garb! Now, let’s all try to imagine OUR civic leaders eschewing an appointed driver and pumping the pedal! (SF and Sacramento do actually have some, thankfully.) People even cycle holding riderless bikes alongside them.  Bikes have trailers for heavy items, and front bins for toddlers.

b) Bicycles are everywhere. There is not a single stretch of wall surface that doesn’t have a bike leaned up against it, or parked on a rack beside it. Nearly every architectural photo I took at street level had cyclists peddling past. Imagine if every iPhone in SF was a bicycle – that’d be a great parallel statistic!

c) Infrastructure accommodates cyclists. Granted, this was within the city limits, so not major thoroughfare conditions, but bicycle traffic definitely held equal footing. There were traffic lights for cyclists. Delineated bike lanes often had physical separation from vehicle lanes (major routes had raised bike lanes on level with the pedestrian sidewalks, clearly marked), and even dedicated turn lanes.

d) Cyclists are civilized. Not to say that they’re not in other cities, but in Copenhagen it has a definite feel of collective cooperation at work.  Cyclists use hand signals, change lanes with awareness, and read traffic flow like seasoned professionals – no erratic weaving, lurching or impulsive stopping for photo ops (at least not after I learned the consequences!).  I never felt ‘run off the lane’ by aggressive riders, and the underlying order was easy to pick up just by observing a few busy intersections during peak commute hours. This is a social system in place!

e) Cycling is ingrained into lifestyle. The prevailing fashion sense conveys it, from head (although most urban cyclists did not wear helmets) to toe (although I did witness several women riding in seriously stiletto heels – yikes!). There is no outstanding ‘bike messenger’ aesthetic – people are just people, on bikes. 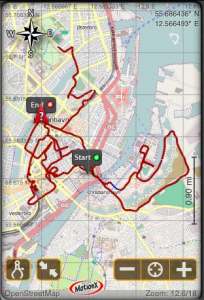 While my week in Copenhagen was blessed with fabulous early fall weather, and my chosen routes were relatively level and well populated by other cyclists, I really felt that what I saw during my rides are indicative of the general way the city’s inhabitants integrated cycling into their daily lives.  I was truly inspired to bring a bit of the Copenhagen cycling flavor to my San Francisco riding experience, so I’ve traded my decade-old heavy hybrid mountain bike in for a bright colored, upright riding, step-through ‘urban’ bicycle that makes me yen to peddle it out to meet friends for brunch, flowered skirt flowing in the breeze.  I will, however, be wearing a bike helmet.

This entry was posted in Urbanism and tagged Cycling, Liveability, LocalColor, Travel. Bookmark the permalink.

One Response to I (cycle) CPH