While the standard view creation process in Revit works well for the simple production of callouts from overall plan views, most larger projects find they need transitional views – Overall to Partial to Enlarged Area, THEN to details.  These additional steps, if done with the OOTB method, tend to rack up automatic callout bubbles that become unreadable – and therefore worthless! – right away.  Here’s a revised workflow I recommend instead: 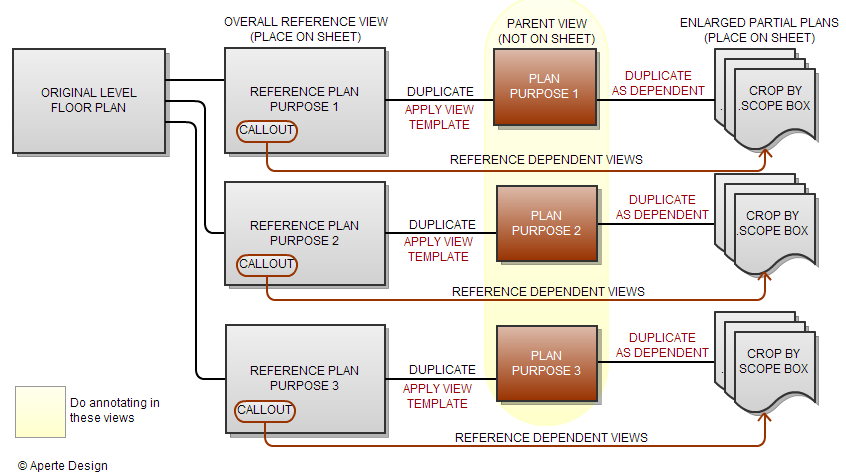 This keeps the overall plans uncluttered, allows for collective management of annotations in a ‘parent’ view, and coordinates cropping of sub-set views.

Create a NEW local file from the Projects > Open > [select the CENTRAL file], verify that CREATE NEW LOCAL is checked, and OVERWRITE EXISTING FILE when the option pops up.

Complications that can arise from working in yesterday’s local file:

a) on larger teams, the amount of change that may have occurred since you left your old local may be very cumbersome to synchronize – or Revit may fail to sync it at all, which puts you at risk of lost work.

b) any maintenance that may have been done on the file after you closed out (audits, compression, purging) would be immediately overwritten by the old local’s sync – loading all that fat back into the model.

If your current model files are relatively small – ~100MB, you may not be on a large team, or doing frequent model maintenance, and you may think this doesn’t really apply to you.  When your projects move into DD/CD and get into the 300MB range, these risks have even greater impact – greater consequences! – so get the new local habit in place NOW.

Users often complain about ‘missing lines’ where complex assemblies overlap/embed into each other: 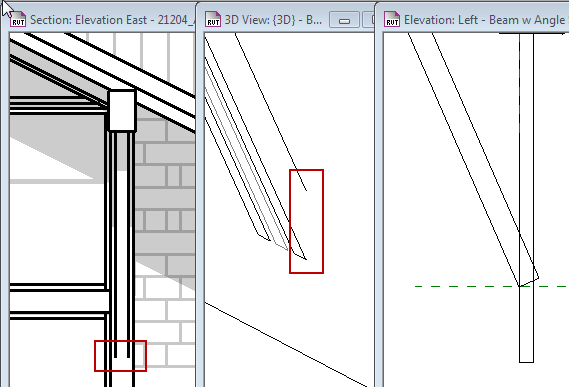 The easiest resolution for this is to use the Join Geometry tool, and select the two elements that overlap, however if the elements are (as in this case) nested within the family that you are trying to Join, this does not resolve the issue.  The adjustment must be made in the original element family: 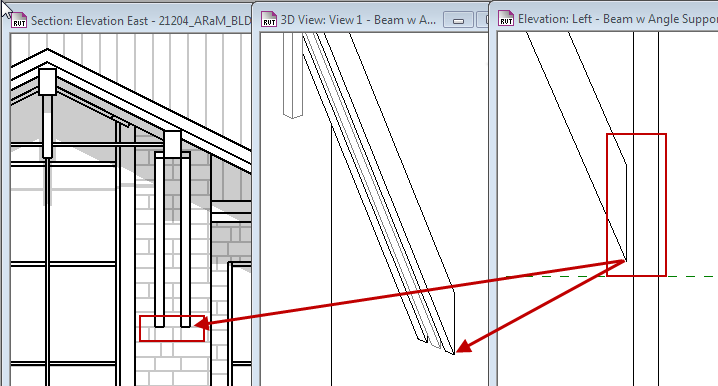 RESOLUTION:
Add a VOID into the family that ‘clips’ off the portion that would be embedded into the project element.  This creates a ‘hard line’ cut edge of the element that appears in the project environment.  The reason for the space, as seen in the section view, is that the wall-based family is created on a default host wall, which lacks any finish material definition: 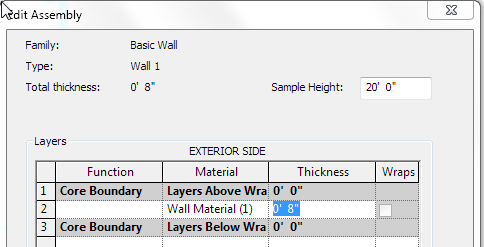 The user needs to anticipate the depth of finish layers, and plan that offset into the component family. Alas, there is no way to have the family ‘read’ the project host data and adjust automatically.

TIP: When creating wall-based component families, adjust the template default wall to the thickness anticipated in the project(s).  This is especially helpful with complex components that have geometry that insets into its host.

I like to give credit where credit is due – and this aspect of working formulas into parametric families deserves a bit of praise – when selecting parameters in the Family Types dialog, the view will highlight the parameters that are affected by it – very helpful when reviewing/modifying content that you may not be completely familiar with (or when complex parameter names are so cryptic you can’t readily determine what they control): 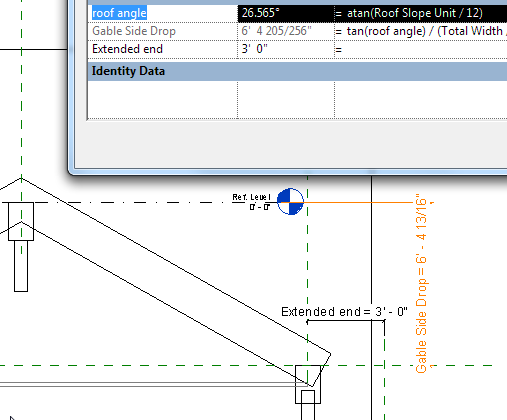 Nice visual assistance to the modeler – love it! Thanks, Factory!

When creating Groups of elements, Revit creates a default origin point at the ‘center of mass’ of the selection set.   It’s easy to simply accept it, name your group and proceed with placing it numerous times throughout your project.

The challenge with the ‘center of mass’ origin/insertion point is that it is so arbitrary: it’s fine when you’re making simple edits to the group later, not so fine when you need to select multiple instances of groups and change them out for alternates.  Since the alternates likely ALSO have an arbitrary origin/insertion, based on its ‘center of mass’, they rarely coincide.  I’ll go so far as to say they NEVER coincide, so you’ll have to spend time repositioning them.

When creating the group, look for where the X/Y origin marker appears, and simply press/drag it to your desired location (in plan).  As noted in a previous Group tip, it’s good to have a 3D view open to confirm the elements being combined into the group, and you can switch back and forth between plan/3D views to select/deselect if necessary, but make the origin setting in the plan view, so that it associates to the plan level (moving the marker in 3D runs the risk of it snapping to an element edge that is NOT in plane with the level, and things can get out of plane that way)

NOTE: In previous versions of Revit, you had only one opportunity to set the origin of a group. In the current version, you can reset the group origin after it has been created, so don’t leave groups with arbitrary origins!

Unit layouts – set origins to intersecting wall faces or grid lines at a demising wall / corridor wall.  I’ve swapped a LOT of unit layouts, and this has proven to be the most stable reference for full unit layouts, as most variations happen at the perimeter wall.

TR/Bathroom layouts – the corner beside the toilet is the starting point for the majority of key placement/clearance dimensions.

Kitchen layouts – the wall join at an L layout,  or a wall/cabinet corner for a galley/center floating layout.

Closets/storage – demising wall connection point, where it would most likely respond to adjacent walls already in place.

The more consistent teams are with setting logical group origins, the more opportunity there is to create ‘swappable’ group options, and reuse groups in subsequent project files.

Component content management is an ongoing challenge, and it is important that teams understand the desired lifecycle flow.  Infographics help A LOT: 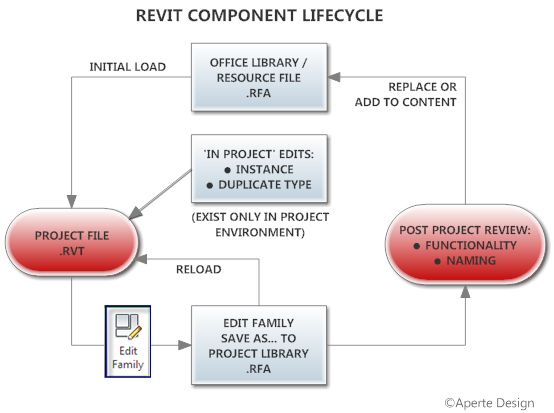 I’ve been using SmartDraw to create these workflow diagrams, and I’m loving the program: easy, flexible, and lots of graphic control. We likey!

We designers are visually oriented folk. Defining a workflow that teams will understand (and therefore more likely follow) has been most successful if accompanied by one of these: 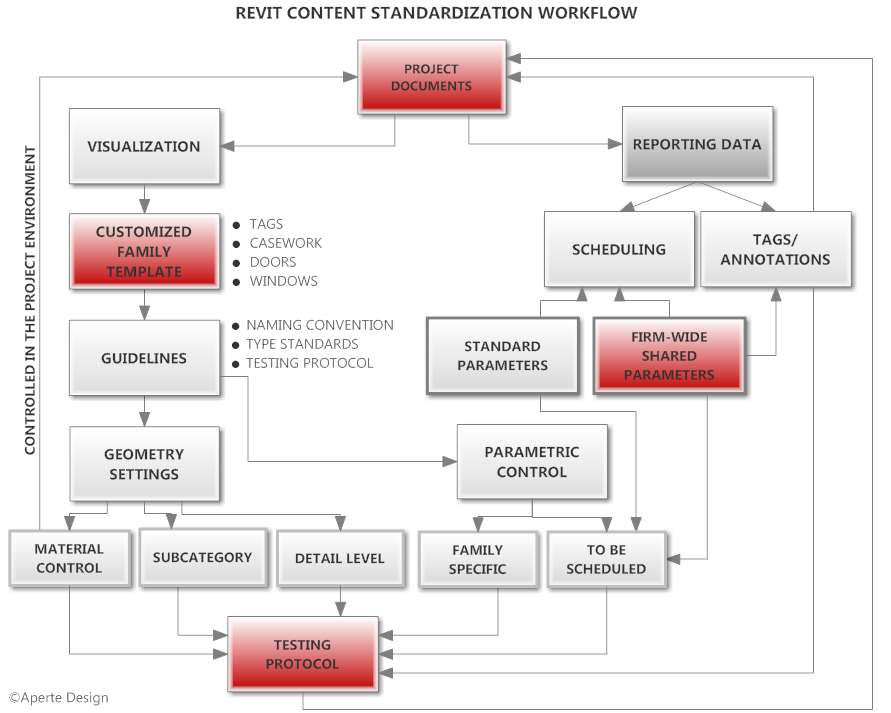 Each item is expanded on in documentation I’m adding to a client’s intranet ‘wiki’.

Each project has to qualify their elevator spec, which typically means a customized family per project.  I’ve created a prototype lightweight (2.5D) family that can be adjusted per specified unit, with dims ‘locked down’ to prevent modifying away from the manufacturer’s settings. (Note dims in GREY cannot be modified in the project – only in the .rfa)

The elevator is placed on the lowest service level, and it’s Total Run Distance defining the floor-to-floor of service (family default is set to the manufacturer’s maximum run).  This will automatically show the 2D floor plan linework on every level the elevator passes, and it will schedule as ONE elevator (as opposed to a client’s old method of 2D elements copied to various floors and counting up multiple elevators). 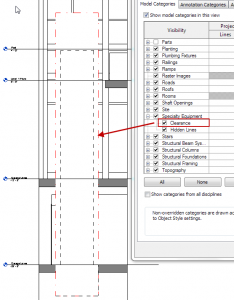 The cab and clearance linework will show up in (parallel) sections (not angular sections, being symbolic lines).  The visibility of the ‘clearance’ is a VG subcategory setting.

NOTE: This family will NOT cut openings in solid floors – user should add a Vertical Shaft in addition to elevator family (to accommodate combined shafts, multiple cab units, etc)

The family also includes a vertical ‘clearance’ mass that will trigger hard clash detection with other elements in the model, for QC, and the Interference Report will graphically identify the element it is in conflict with: 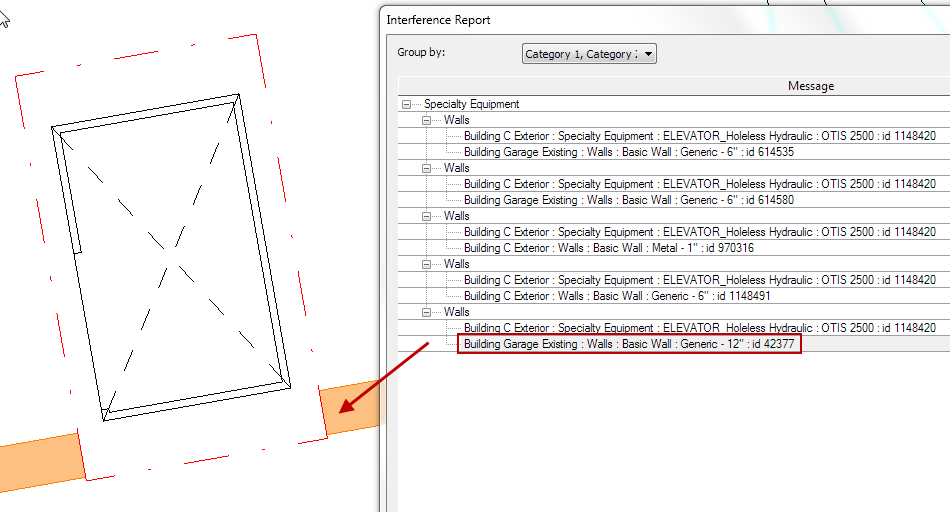 The emphasis here is on getting what we NEED out of the family, and not getting bogged down with visualization of the element. Interior elevations will be created as usual from an enlarged plan, but will rely on applied interiors elements (thin walls w trim).

The majority of current projects I’m consulting to are multi-family housing, or patient care.  Both utilize model groups extensively to efficiently duplicate and update the repetitive room/unit layouts across multiple levels.  While good for repetition and update management, groups can be processing intensive for Revit. A few things to keep in mind:

a) Exclusions from groups are VERY processing intensive.  With each regeneration, Revit must individually check each group instance and ‘remove’ exclusions.   If processing triggers a ‘clock time’ violation, excluded groups are often ‘fixed’ by Revit by duplicating the group and adding the dreaded “1” suffix, which means – that group will not update with it’s original group, and you may not notice that until a deadline!

TIP: Keep your groups to the lowest common denominator, and add to, rather than subtract from.

b) Watch for group elements that extend beyond their intended range – such as this multi-story shaft wall (that shouldn’t have been included in the group in the first place) – that once copied up to higher floors, resulted in overlapping walls that had to be excluded from subsequent group instances. 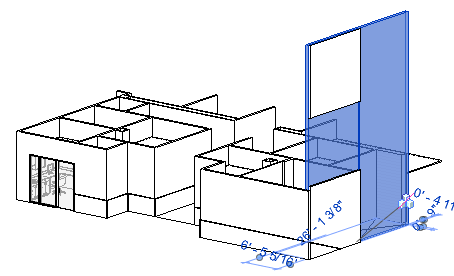 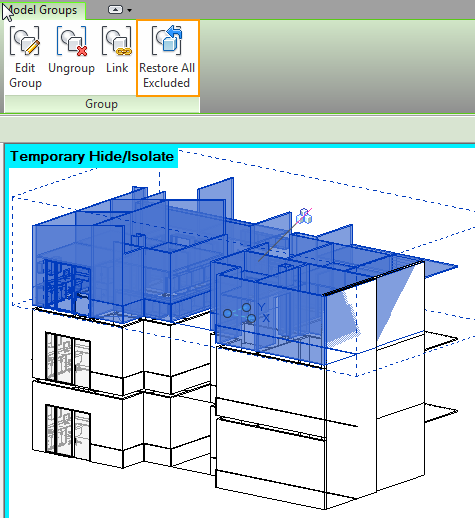 RESOLUTION:
How to avoid / check for these?  Work with 2 views – the plan view and a 3D view.  Select desired elements in plan; ‘temporarily isolate elements’ in 3D to verify the elements selected.  In this case, either remove the multi-story wall from the group (and follow up removing duplicated walls on other levels) or modify the wall to a single level height and reinclude it into the subsequent group instances.

Today’s tip is on eliminating the pesky “not placed” rooms that crop up in schedules:

How it happens:
Rooms get created to label spaces in early design iterations, then are deleted as the design evolves.
While the element is now gone, Revit holds the data of the room in the file, to either be repositioned elsewhere, or as a means of tracking demolished rooms vs new rooms, etc.

Quick workaround:  To hide these ‘not placed’ rooms, set the schedule’s Filter to Area  > is greater than  > 0

Note:  “Not Placed” is not the same as “Not Enclosed”, which indicates a room that lacks a fully enclosed boundary – often the case when tagging exterior patio space or other non-enclosed zones.  Notice that the “Not Enclosed” rooms associate with a Level, where the “Not Placed” rooms do not, because the deleted element no longer exists to have a Level association.  If tracking these exterior areas is desired, adding Room Separation Lines to complete the boundary enables Revit to triangulate the area.

Resolution:
If the data from these deleted rooms is NOT desired to carry data forward, or to summarize demo/new rooms, then these can be eliminated from the file completely by selecting them in the schedule and applying the “Rows: Delete” tool: